The draft agenda for the AGM can be found at this link.

and the agenda for the Ordinary Meeting can be found  here.

Unfortunately newly elected Councillor Ruraidh Stewart is unable to join us but it is expected he will attendd the September meeting after the summer recess.

Following the  recess public meetings will be held on the following dates at 1930 with venues to be confirmed.

We look forward to welcoming you to these meetings following the restrictions of the COVID-19 pandemic. All meetings will be held under government social distancing guidelines.

The Scottish local government elections took place on 5th May which saw four elected members appointed. Two were re-elected to the Skye and Raasay ward and two more were newly elected. The names are shown on the photo below.

Full information on the election results can be found at this link. 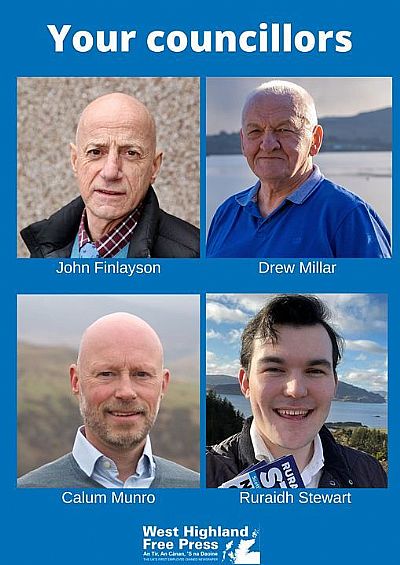 Councillor John Finlayson was until the election the aligned Elected Member for Sleat Community Council. In due course we will be advised if this arrangement may continue or another Councillor will be aligned to our council.

For further information on this or any other issue that you may wish to speak to us about please get in touch via the CONTACT US page.